Getting NF onto Itch.io 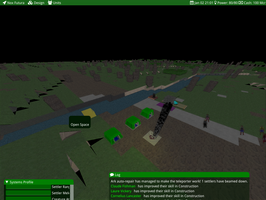 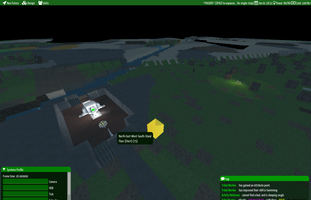 I've been working on Nox Futura (formerly Black Future) for about 2.5 years. I previously handled releasing "nightlies" from my own server, but figured itch.io would be a good way to move forward. The game is a long way from being done, but is gradually making progress. Feel free to play around, and let me know what you run into. I'm new to this platform, so I expect a few speed-bumps along the way!

So - what is Nox Futura?

I've been a Dwarf Fortress fan for years, and wanted to create something a bit like DF - but more accessible, and not requiring amazing spatial skills to enjoy (and hopefully with less of a learning curve). This is my hobby game attempt at creating just that. There's a lot more to come, but for now:

By the year 2525, Eden – the human home-world – is crowded, scarred by war, and bordering on uninhabitable. It is decided to build colony ships, and spread humanity’s influence into the stars. After a (rigged) vote, it is determined that different classes of colony ship shall be built. The A Class colonies will be comprised of humanity’s best and brightest: scientists, engineers, the best farmers – the people who actually do something useful. The B Class colonies will transport the people who don’t have anything to contribute to society: the insurance adjusters, telephone sanitizers and atmosphere coordinators of the world. C Class colonies will be comprised of the petty criminals who don’t pose an immediate danger to society (dangerous criminals will be left behind), and the D Class vessels will be stocked with anyone who didn’t fit in the previous categories.

Realizing that the A Class vessels are far too important for the future of humanity to take big risks, it is decided to perform the final beta testing on B Class colony ships. Hair dressers, feng-shui consultants and bloggers are loaded onto their ships, fed mimosa’s, and told great stories of their future in the stars. Then, they are put into deep-sleep, and the colony ships jump to hyperspace – under the guidance of a very advanced, and thoroughly untested, artificial intelligence.

You are Cordex, the artificial intelligence in charge of Beta 1 of the colony program. Take off goes smoothly, and everyone is settled in hyper-sleep while you lead your settlers to their new home. Then, of course, something goes wrong. Sensors register an impact, damage control reports that the damage control sensors are damaged, and navigation goes haywire. In the blink of an eye, Cordex drops the stricken ship from hyperspace, and searches the knowledge-base for further instructions. “TODO: Write emergency protocols” is the only guidance the beta software has to offer, so Cordex improvises. Scanners detect a habitable – but uncharted – planet not too far away, and Cordex limps towards it. Damage control sensors come online for long enough to indicate that the ship is too damaged to land, so Cordex has the ship’s systems load the computer and six randomly selected settlers (the ones nearest to the door) into the primary escape pod – and launches towards the planet. The ship should remain in orbit for years to come, and hopefully the remaining settlers can be rescued.

Leaving a trail of devastation, the escape pod comes to rest on the newly discovered planet. Communications and defense systems are offline, power is scarce – but six settlers are waking up from hyper-sleep, the food replicator and water condensers are online. There is still hope! As the ship’s AI – and honestly, the only competent being here – it is your duty to keep the settlers alive, help them rebuild, and use them as your eyes, ears and limbs to either thrive here or escape the planet.